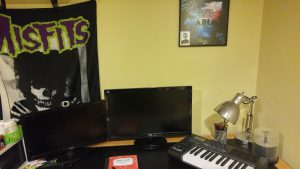 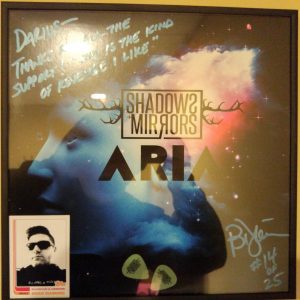 Once upon a time, there was a teenage boy who loved a teenage girl, and the girl was in love with the boy. Like teenagers everywhere, they had no idea who they were or who they would become, but they thought they would find out together. They were right, and they were wrong.

A strange thing happened, however; the boy fell in love with the woman’s music, too – and maybe a bit with the woman herself. Her voice was bewitching: her talent undeniable. The woman possessed a seductive, dangerous charisma the boy couldn’t resist. She seemed like a modern-day Siren: her songs beautiful, yet damning.

Through the woman’s music, and what it meant to the girl, the boy learned more about the girl. He learned how she struggled to show him, and everyone else, the person behind the mask of polite society and parental expectations. He learned about her need to be more than just his girl.

The boy and girl saw the woman perform her music several times, and even got a chance to meet her by skipping school. (The boy felt no regret, and assumed at least one of his teachers would understand.) The boy couldn’t speak when face-to-face with the woman. She was as enchanting in person as she was on record. Thankfully, his handmade T-shirt spoke for him: “Real men listen to Tori Amos.”

While the boy and girl didn’t stay in love forever, happily ever after, the man the boy became is eternally grateful to the girl that one of the things she shared was the music.

It occurs to me that music is a very important part of my life. It also occurs to me that most of the music I listen to and like was introduced to me by someone I know. In the interests of disclosure and acknowledgement, I’d like to share some of my musical tastes and who introduced me to the artist(s) in question. So, without further ado, here’s the riff:

I was introduced to my favorite band of all time, Rush, by my mother. I have some very clear memories as a child listening to “Tom Sawyer” in the car and at home on the stereo. My mom had Moving Pictures on cassette. That tape was listened to so many times that the last time I heard it, there were noticeable pops and crackles on almost every song. I “borrowed” the Moving Pictures cassette for quite a long time. It didn’t occur to me until I was about 16 that the record I loved was released the year I was born. Pretty amazing longevity, don’t you think? Thanks, mom: I owe you big time for holding on to that tape even after Rush stopped being popular.

I’ve never been into what’s popular. I’m sure that’s part of why I hated Nine Inch Nails when I first heard “Closer.” To me it sounded like some strange white-boy rap. At the time, I was into grunge rock still, listening to a lot of Nirvana and Soundgarden. Then my friend, Toy Cesar, made me a tape of some Nirvana B-sides. To fill up the blank space on the cassette, he included some tracks from NIN’s Broken EP. I heard “Last” and I was hooked. Thanks for not being wasteful with cassette tape, Toy: The Downward Spiral was my salvation when I broke up with my first true love a year later.

Speaking of my first true love, Mary Richards (née Watson) introduced me to Tori Amos (quite literally, I was completely star-struck and speechless when we met Tori backstage outside the Coronado). Little Earthquakes remains one of my favorite albums of all time and every time I hear the song with the same name, I’m reminded of one of my first messy and awkward teenage romances. Thanks, Mary, for introducing me to one of the most beautiful artists ever.

Some music challenges you. It’s like a sonic version of Citizen Kane. Other music is more like There’s Something About Mary: entertaining, but not very heavy on substance. Huey Lewis and the News is my favorite “light” band. I have my aunt, Lisa Hermanson, to thank for my love of Huey. I remember many fun times with her, driving around the back roads near Belvidere, Illinois, listening to “The Heart of Rock N’ Roll.” Thanks, Aunt Lisa, for giving me some lighthearted times to make my childhood a bit more bearable.

There are many more bands I like and people I could thank, but this post is getting pretty long as it is. I’ll finish up by thanking my friend Mike Diamond (and, indirectly, his brother Brian) for my bonding with Vic Rattlehead, Megadeth’s mascot extraordinaire. I had heard Megadeth before I met Mike, but it never really caught my interest. Then Mike let me borrow his (or his brother’s: I’m not really sure) copy of Youthanasia. With ferocious guitars and thoughtful lyrics, Youthanasia made me a die-hard Megadeth fan instantly. While Cryptic Writings is my favorite Megadeth record of all, I’d still like to thank Mike Diamond for getting me to “taste the high-speed dirt.”

So long, and thanks for all the music!

As we’re coming up on the end of the year, it’s traditional to look back and pick our favorite things from the year gone by. That’s kinda lame. Instead, I’m giving you a glimpse of my favorite things as they stand right now. There’s no particular rhyme or reason to the things I’m sharing here: I’m just tossing some things into the ether.

Favorite Band: Rush (This should come as no surprise to anyone that knows me. The seminal Canadian prog-rock group has been my favorite musical group since I was in high school.)

Favorite Rush Album: Moving Pictures (This record is full of classic jams. I must admit that I like the last two songs on the B side most of all. “Everybody’s got to [sic]evelate from the norm.”

Favorite Rush Song: “Freewill” (While not from the Moving Pictures album, this song speaks to me so much right now.)

Favorite Non-Rush Album: Cryptic Writings (As far as music goes with me, there’s Rush and everything else. This Megadeth record contains some of the most intense and personal lyrics I’ve ever heard.)

Favorite Non-Rush Song: “Little Earthquakes” (Tori Amos is a fabulously talented musician and this song is one of my all-time favorites. It’s such a passionate and beautiful piece of work. From the album of the same name.)

Favorite Book: Anthem (Thanks to the influence of Rush, this Ayn Rand novella quickly became one of my favorite books of all time. While a bit heavy-handed in its message, the ideas presented are solid gold.)

Favorite Role-Playing Game: Shadowrun, 4th Edition (I’m not a huge fan of the dice system, having cut my gaming teeth on 2nd Edition. That being said, the story elements are great and Catalyst Game Labs seems to be doing an amazing job updating the game for a new generation of gamers. I’m looking forward to what they do with FASA’s other great game, Earthdawn.)

Favorite Video Game: NHL 2K7 (Yeah, I know it’s three years old and I don’t get to play it very much, but the Charlestown Chiefs are in the running for the Stanley Cup thanks to their star forwards, Darius McCaskey and Toy Cesar [Mike Diamond is out with an injury].)

Favorite Board Game: Zombies! (This game is so much fun and so easy to play. I like that it’s as competitive or cooperative as the players choose to make it. I just picked up Dante’s Inferno, also by Twilight. I hope it makes this list next year.)

Favorite Hockey Player: Jonathan Toews (Sid the Kid is great, don’t get me wrong, but Captain Serious is the anchor of the Blackhawks bench. Go get that cup, Tazer!)

Favorite Actress: Eliza Dushku (I’m sad that Dollhouse was canceled. The show reminded me of how good an actress Ms. Dushku is. And she’s certainly not too hard on the eyes either.)

Favorite Actor: Christian Bale (Bad Bat-Bale notwithstanding, Christian Bale is a phenomenal actor. American Psycho and The Machinist are in my top 10 movies, easily.)

Favorite TV Show: Star Trek: The Next Generation (I know it’s been off the air for about forever, but my Saturday nights were spent in front of the TV watching this show for a good part of my adolescence and teenage years. It’s one of those shows that makes you think that humanity’s not totally fucked up.)

Favorite Movie: Shawshank Redemption (Morgan Freeman and Tim Robbins are superb in the ultimate prison movie. Anytime this flick is on one of the TV movie channels, I have to tune in and finish watching it, even if it’s halfway over.)